Hyperledger Indy is a next-generation Blockchain platform for securely managing personal information, and connecting applications in a secure and privacy-preserving manner.  If you are not familiar with Indy you can read an overview here.

Indy supports a Layered Architecture - you don't need to know Blockchain fundamentals, or even the nuts and bolts of hooking up an Indy Agent, in order to build Indy-enabled applications.  Indy Agents can easily "Indy-enable" an existing application to enable it to issue Credentials and to receive and understand Proofs.

Indy provides a 3-layer software model (plus Layer 0, the Ledger itself), including: 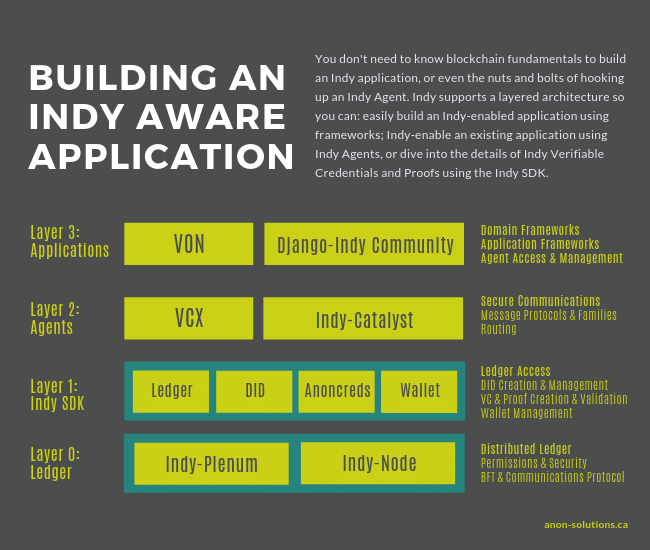 An Indy network is a Distributed Ledger (or Blockchain), maintained by a set of Nodes, and based on a Byzantine Fault Tolerant Protocol (BFTP) called Indy Plenum.

Sovrin is an implementation of a public Indy network.  That's probably all you need to know!  If you are building Indy-aware applications they will probably connect with Sovrin, or an equivalent public network.  If you are building your own environment for development, proof-of-concept, etc., there are distributions available (such as the VON Network, developed by the BC Government) that can be deployed quickly and easily using Docker.

The Indy Software Development Kit (or SDK) provides the main application interface on top of an Indy Ledger.  The Indy SDK is built using Rust and provides language bindings for Python, Java, Nodejs, C# and other languages.  The Indy SDK is a modular framework, and includes the following core modules:

Indy uses the cryptographic functions from Hyperledger Ursa, which is a shared library across Hyperledger projects (and available for use outside of Hyperledger as well).

The Indy SDK has a plugin architecture, and supports plugins for different Payment types and Wallet storage methods.

The Indy SDK includes a "V1" Agent called VCX.  This is based on a custom Agent protocol developed by Evernym and supported by Evernym applications.  This Agent has been released as open source within the Indy SDK.

Interoperable Agent protocols have been developed through the HIPE process (or Hyperledger Indy Project Enhancements) and there are a number of "V2" Agents in active development.  (VCX is also in the process of being upgraded to support the interoperable "V2" protocols.)  A popular Python-based Agent is Indy-Catalyst, developed by the BC Government.

Indy Application frameworks provide (a) reusable implementations that are focussed on a specific business problem, or (b) frameworks that provide abstracts on (and generic implementations of) higher-level Indy-based functionality.

The BC Government Verifiable Organizations Network (or VON) is a framework for building networks to find, issue, store and share trustworthy data about organizations.  VON includes generic modules for implementing Credential Registries (public stores of Verifiable Credentials) and an Agent framework to easily add Issuers to the network.

Dyango Indy Community is a Python/Django-based application framework, built in collaboration with a UBC Blockchain research project studying the potential for using Indy to share health data for research purposes.  This framework is currently based on VCX and provides a sample user interface and a Docker-based development platform.  There are some demo applications available, and the framework is currently being upgraded to support the BC Government's Indy-Catalyst Agent.

Ultimately, Indy developers will work exclusively in Layer 3, using established frameworks.  However, Hyperledger Indy is a relatively new platform, and each layer is in active development.  In the table below, "Maturity" defines the level of maturity of the software components that make up the layer, and "Developer Engagement" defines the level of engagement Indy developers should expect to have with the respective software components:

As an Indy Developer, ultimately you will be working on and with higher-level Application Frameworks.  Given the relative maturity of each layer, you will likely be reviewing code for (and possibly contributing to) Layers 1 and 2, even if your primary focus is the use or development of a Layer 3 Application Framework.

Stay tuned - Anon Solutions is going to publish an introductory set of video tutorials that provide a technical overview of each layer, along with tutorials and pointers to sample code and related documentation that is available online.  There is also an associated Docker-based development environment that you can use to get up and running quickly.

Indy for the Enterprise

Read more about Hyperledger Indy and how it solves modern business problems in a new and innovative way.

Read more about Indy's architecture and how you can easily build Indy-enabled applications.

Read about how Indy can enable User Managed Access.